AI is likely to help rather than steal your job, the coming “cookie apocalypse” is somewhat overblown, and fake news isn’t a problem for social media companies alone. These were just three of the main takeaways from a webinar held on 10 February, “Data: Behind the Headlines”, delivered by Magda Woods, tech entrepreneur and founder of AI consultancy And The Robots, as part of the PPA’s new events series, PPA Decodes.

Woods, a former academic, talked about several key challenges that are somewhat misunderstood in the media industry. The events series, which aims to demystify headlines around challenges and topics affecting publishers, is part of the PPA’s overall rebrand under new CEO Sajeeda Merali.

So what are some of the biggest tech- and data-related challenges facing publishers today?

The so-called cookie apocalypse: more of an opportunity than a threat

As FIPP explored in a recent in-depth report, there has been a lot of doom and gloom around this topic, and with good reason. “The third party cookie system makes marketers very happy,” Woods explained. “It creates an excellent dataset so marketers can create rich segments and target users across websites.”

Third party cookies, of course, also allow publishers to run core functionalities such as analytics, experimentation, and personalisation. So what happens once they’re gone?

“Marketers will be desperate for user data, because they will be losing access to a lot of data after this change,” said Woods. “About 90 per cent of the internet uses these browsers, so it will have a massive impact. For the publishing industry, the risk is where the revenue relies on third party cookies (display advertising).”

Unfortunately, social media is very good at spreading false information, and unfortunately AI is helping that to happen. It becomes cheap to produce false news.

However, as FIPP has emphasised again and again, this also represents a major opportunity for publishers to enhance their offering and use the rich first party data to develop deeper, higher quality relationships with audiences. The problem is that many still aren’t prepared for what is to come.

There is a role for artificial intelligence (AI) in finding solutions to this, said Woods, who is a specialist in this topic, but this should be approached carefully. “There is a huge expectation in the market that publishers will adopt AI as we go forward,” she said. “Investment in AI doubled in the past year; the UK government launched a National AI Strategy. There’s so much interest. All of this, though, is causing massive expectations that we must engage with this technology in order to run ads in the wake of third party cookies’ decline.”

What’s crucial is that publishers must learn to use these technologies to their advantage by understanding exactly how to deploy them. This led Woods onto her next point.

Data itself does not equal revenue

“We hear a lot about how ‘data is money’ or ‘data is the new oil’, but this is a bit of a misconception,” said Woods. “As shown by many oil-rich nations, having resources doesn’t automatically translate into money. You still have to convert crude oil into something that is monetisable.”

Likewise with data: “What I’m trying to illustrate is that it is always a journey. If our starting point is ROI, then we are only at the beginning of the journey. What we probably want to get to is a point where the systems are doing the work, which frees up the people to do other work. But broadly, there is a step by step process that needs to happen to monetise data well.”

Despite the fact that we keep hearing about advances in AI, we are not yet at a point where robots are taking over the jobs of journalists, per worst fears circa 2015. One example of AI being used in the mainstream is GPD-3 (Generative, Pre-trained Transformer – a kind of AI that is very good at imitating the language structure of humans), but at the moment it is mainly used in search functions, programming and coding – not writing stories.

So in 2022, robotically generated news is still in the minority. Research shows that the content that generates massive returns is the “blockbusters” – high effort and high cost result in large audiences.

Woods argues that the best way for publishers to think about AI is in terms of enriching (human) teams. “We need to not look at the blockbusters but at the Moneyball [book by Michael Lewis] – we want the combination of Brad Pitt + statistics, so using stats and data not to find the next superstar, but to find and train the best team to optimise the results.”

Only then can we enrich our teams when it comes to automation of processes: “We need to think about outsourcing to robots – How can we use synthetic media, automatic news generation etc.?”

What is quite unique to our business – and what drives pressure on publishers – is that we want the public domain, industry and advertisers to know what audience they can reach when they buy from us.

Audience size: does everybody lie?

Next, Woods addressed the question of audience size. “We still have a notion that the louder and bigger the audience, the better. But when we publish content, what we really want to know how many and who is engaging with our content.

“What is quite unique to our business is that we want the public domain – and therefore the industry and the advertisers – to know what audience they can reach when they buy from us,” added Woods. “It’s really this factor which is driving the pressure on publishers.”

There are incentives to overestimate audience numbers: for instance, “40 per cent of digital traffic is bots,” said Woods. “But the problem of overestimation is rather to do with wider trends in market fragmentation, the development of our multiscreen/multiplatform social lives, uneven development of privacy laws between regions and countries. The norm of multiple screen use raises questions like: is this person the same person – ie. do they behave the same way – if they’re using their phone, or using their laptop?”

Crucially, “This is nothing new, but it is exaggerated as we acquire more and more screens,” said Woods.

The result is that publishers count and track audiences in different ways. “We have gone from pure numbers or clicks to dwell time, and now notions of ‘quality’ audiences have changed in the online world.”

One of the challenges is to accept a degree of unpredictability, said Woods. “We’re never going to know 100 per cent of the audience 100 per cent of the time. This means there has to be a degree of prediction involved. Everyone’s methods of doing so (assessing audience) differ, which leads to differing results. There are also technical challenges like low value audiences getting captured by accident, bad installation of tracking tools, and big data being quite inaccurate.

“Community and experts are the only way out of this,” concluded Woods.

Fake news is a problem for publishers, not just for social media

Finally, Woods addressed the ubiquitous phenomenon of fake news. “We tend to think that fake news is mainly a social media problem,” she said. “But it’s a problem for all of us.”

Fake news is used to describe opinions, interpretation, bias, things you don’t want to hear, clickbaits, “truthiness”, misleading info out of context. “But I think the thing we need to focus on at its core are falsehoods and misinformation,” explained Woods. Joe Rogan, for example, “would think he is just giving voice to other sides of the conversation, but often what he is really doing is presenting falsehoods as a part of his podcast.”

So how do we compete with AI-driven falsehoods?

“All roads point to trust,” said Woods. “Trust is a kind of currency of exchange between us as publishers, and the audience. Social media is trusted far less than publishers and news organisations to provide good quality information.”

To this end, fact checkers and AI-assisted expertise and editorial guidance are being invested in by news organisations. This is one area where publishers need to focus their efforts if they are to use AI well, and trust will correspondingly rise – hopefully leading to audiences being better able to spot or avoid fake news.

Woods’ key takeaways from the presentation are: 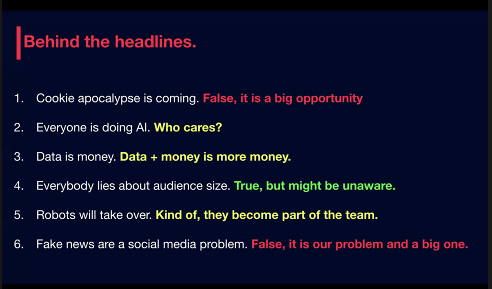